The Green Fortified Home is a common sense approach to building homes on the coast. Green Fortified Homes combines the natural laws of building science and the Institute of Business Home Safety (IBHS) standards to create the ultimate green home to withstand the potential harsh coastal environment.

With over 30 years of green home building experience, Green Fortified Homes utilizes the latest in product technology and building science to produce a comfortable, safe, and efficient home that'll often save home owners roughly 50 percent or more on their home heating and cooling costs.

Using data from more than 20 years of storm damage investigations, conducted by IBHS and other experts, along with laboratory testing from the IBHS Research Center, Green Fortified Homes are built using a uniformed set of superior building standards that greatly exceed state and local codes.

In additional to substantial cost savings realized in green home construction, science-based building practices also reduce the risk of costly damage during extreme weather events and deliver meaningful value to homeowners, many of which qualify for reduced homeowners' insurance premiums.

John’s technical expertise and skills as a craftsman are exceeded only by his unwavering integrity and sense of fairness. Sandra Livermon, Livermon Construction. Inc.

Mooring Construction understands that your home plays a big role in your quality of life. That’s why our team receives continual education, developing skills to enhance the performance of every custom green home we build. As a result, you’ll live in a home with lower energy bills and more comfort than you ever imagined. Many homes might initially impress you with style and luxury appointments, but it’s how your home is built that really counts for the long-term.

Proper framing is important to green fortified home construction, providing an air barrier and insulation that is aligned and continuous. Well-sealed and properly insulated walls, ceiling, and floors help maintain even temperatures throughout the house and save you up to 20 percent plus on heating and cooling costs.

Air sealing the building envelope is one of the most critical features of an energy-efficient custom green home. Air leakage accounts for 25-40 of the energy used for heating and cooling in a typical home. Green Fortified Homes can custom build your green home with a tighter building envelope that will aid in drastically reducing energy costs and improving indoor air quality.

When warm air leaks into a home, it can meet with cooler surfaces where condensation and moisture can build, encouraging mold growth. Green Fortified Homes provide tighter home construction that reduces the amount of humidity, dust, pollen, pests, and noise that can come inside, providing a healthier and more comfortable green home.

Energy-efficient windows employing advanced technologies such as Low-E coatings and improved frame assemblies are used to help keep heat in during winter and out during summer. Low-conductance materials such as synthetic vinyl perform better and are used in Green Fortified Homes to reduce heat loss and gains. These high-performance windows also block damaging ultraviolet sunlight that can discolor carpets and furnishings.

Combustion appliances, those that burn fuels for heating, cooking, or decorative purposes, are sealed or power vented to prevent buildup of carbon dioxide in the home. Traditional brick fireplaces were once a home’s biggest polluter. Green Fortified Homes are custom constructed using direct-vent fireplaces that feature sealed combustion chambers, ensuring that the back-drafting of uncombusted carbon byproducts and fumes into the home is no longer an issue.

A custom Green Fortified Home with a highly efficient building envelope can significantly reduce the amount of energy needed to heat and cool a house. Applying conventional HVAC sizing standards may result in significantly oversized equipment. Oversized HVAC equipment is not better. It operates less efficiently, costs more, and can cause comfort and humidity problems. Green Fortified Homes custom designs each HVAC system to maximize energy-efficiency and home comfort.

In new homes that are tightly sealed, builders need to make sure there is adequate fresh air for ventilation. It is better to use controlled or active ventilation than to rely on air leakage. Green Fortified Homes uses an active ventilation system, installed along with air sealing, to insure that fresh air is provided.

John did a first-class job in building our home. We love it. Most of all, it was nice to have a builder to respond if a need arose. Jeaneen and Davis

In selecting a builder for our new home, we wanted someone with knowledge and experience in passive solar and other green technologies. Bob and Uyen

John paid attention to not only the strength aspects of the insulated concrete form house, but also to detail of the interior work, including beautiful molding and decorative trim. We received exactly the house we dreamed of with John Mooring's help and skill. John and Carroll

In 2008, John earned Third-party Verification Status for the insurance industry’s Fortified for Safer Living Program. Since that time, the company has built multiple green homes that have received the Gold Seal of the Fortified Home Program.

In Sunset Beach, John built a custom green home with average HVAC bill of only $35/month during the first 36 months. He also built a 3700ft² custom green home in Holden Beach where the average monthly HVAC costs was only $47.82.

We chose John to build our custom green home to withstand the strongest tests of nature, while also taking advantage of the panoramic view of the water. Bob and Uyen

Testimonials From Our Clients

We selected John to build our passive/active solar home because of his prior experience with passive designs. He delivered everything that we asked for and was extremely flexible and helpful in making little changes during construction to improve on our initial designs. He is very attentive to the little details that make the difference between just OK and perfect. Not only was he easy to work with during construction, but after our home was completed John continued to follow up to make sure that everything worked as intended and to make any adjustments/repairs that were needed. He was especially helpful in working on our behalf with suppliers of components that were under warranty. We recommend John for his knowledge, workmanship and commitment to his client's best interests.

When we moved here from Pennsylvania the one concern I had about the Coastal Carolina area were hurricanes. I researched "hurricane proof" construction and was sold on insulated concrete form (ICF). There was a picture I found in Mississippi after hurricane Katrina showing some poor town completely leveled... except for one lone house still standing, yes an ICF constructed home. Our designer Jack Scarborough put us in touch with John who was familiar with this type of construction and has built this type of home before and as they say, the rest is history. John suggested some changes to the design that we thought were beneficial and the final result speaks for itself. When everything was completed, we met the very strict design and construction regulations set forth by the Institute for Building and Home Safety (IBHS). We earned the GOLD award from IBHS and couldn't be happier. Thank you John.

John Mooring built a new home for us, one that I designed and he brought to reality. His great depth of knowledge, experience, work ethic, patience and kindness were invaluable. I liked that he personally supervised the work and was on the site very often. As a professional engineer, I very much appreciated John's life long interest in building science, building envelopes, structural integrity, energy efficiency, and innovation. He's been into that stuff for decades now, not as a recent fad. To me, that puts him in a different class than your average builder.

Four-time RMHBA Builder of the Year 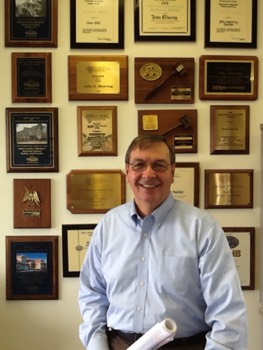 More Testimonials From Our Clients

In matching Builders to my Clients' needs, I've found John Mooring to be very knowledgeable of the building industry, codes, etc. & highly experienced in a wide variety of home styles. He has a proven track record & his detailed approach to planning demonstrates his commitment in meeting - if not exceeding - their needs. His hands on philosophy ensures quality in construction & a finished product my Clients can be proud of.

John Mooring is and excellent builder who listens, is honest and cares about his product. I designed my house and John drew up the plans for me to insure that it would be perfect, and it is. John also has been available to come back and help adjust things after the house was built. I love my house, it is safe, secure, economical and the flow is just right. In the future I plan to build another house and I will only do it if John is the builder.

John Mooring is one of a handful of builders who truly understands how a building works, not just as a structure, but as a dynamic environment in which climate, ground, construction, and use by inhabitants all interact to demand performance. He is constantly educating himself on the latest in building science, and knows how to create the most resilient residences on the coast. John has my enthusiastic recommendation for your project.

Browse more reviews and projects on our Houzz page